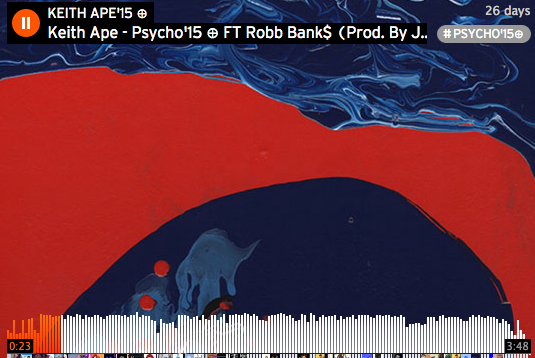 Asian Rap sensation Keith Ape is back again with a new trap track called “Psycho” ft Robb Banks.This track is dark sounding and has a hypnotizing rhythm. Listen close and you will hear some English words mixed with Korean.This could be a reason to why Keith Ape is so popular.

Is his ability to combine languages in his raps allowing him to appeal to more people?Keith Ape has worked with Wacka Flocka and other big  U.S. rap names so read up on him. He is just getting started and is a fairly new name to the U.S. but he seems to be gaining popularity and he is on his way to becoming a recognizable name in the world of rap.
Check out his latest and more from Keith Ape on his soundcloud.

This track “THE BEST” comes from some Cleveland rappers LilWaun, Ty Trap, and RD go in on a trap beat.Check out more tracks from this crew on soundcloud.

Get up to 80% off.Exclusive Deals on Designer Brands, Accessories, and Home Decor from BeyondtheRack.com. Invitation Code: SHOPBTR2015

Check out the Fall 2015 delivery two release from dope street wear brand 10.Deep. This release has some nice pieces including parka coats, sweatshirts and flannel button ups.As usual the designs are fly and use quality materials.Check out more from this release by checking out their Fall 2015 Delivery Two Look Book.

Have you seen the latest video from dat boi #SupaFuture?Did you see da boi cape?Breh…If you have not seen it you can check out his latest video for his track called “Stick Talk” below.

This is a new track from Underground hiphop artist Doja Powerplay.His music sounds like classic hiphop and is reminiscent of old school Wu Tang.If you are looking for a new artist to listen to check out DOJA POWERPLAY. This track is called “How Many”.Check out more from Doja Powerplay at his sound cloud below.
*quick mix* How many ft. Holy by Doja Powerplay #SoundCloud
http://soundcloud.com/dojapowerplay/quick-mix-how-many-ft-holy